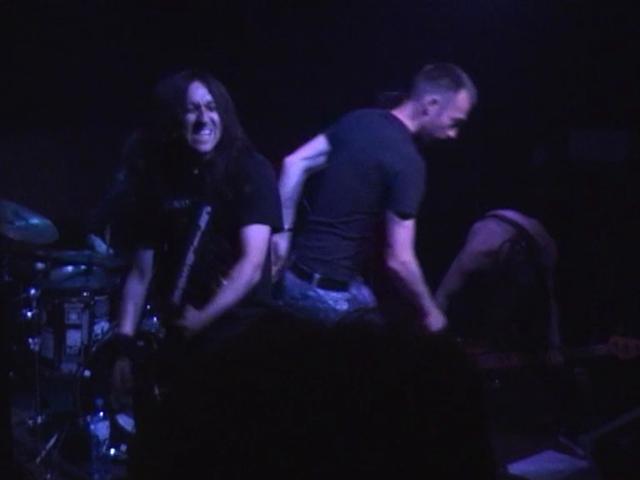 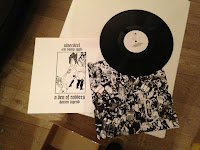 Our split LP with Alkerdeel is out! It took a while and we didn't get it in time for the release show (which was great nonetheless, thanks everyone for supporting our bands!) but it's finally here! Meanwhile some people with an opinion have written theirs down about the slab of black gold, you can find the links a bit lower.

We've also got some new shows lined up:

Stino made a little video for one of the songs on the split LP, you can check it here Enjoy!

We're glad to inform you that our songs are all recorded, mixed and now sent off to James Plotkin (of Khanate, O.L.D., Scorn, ... fame) for mastering. The split with Alkerdeel is nearing completion!
For our local supporters we can gladly say we have two shows coming up, one next week on the 28th of September in Gent with the mighty New Lows (US) and Full Of Hell (US). Place to be is Charlatan, on the Vlasmarkt.
A couple of days later we play with Psychofagist, Murder Intentions and Hybrid Viscery in Oostende on the 10th of October.
We're also having new stickers printed and the Face Your Underground 12 compilation will be out in the following weeks as well.

That is all for now. Next update we hope to present you the artwork for the split and maybe a new track too! Robbers Out! 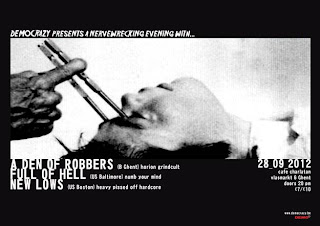 The shows with Thou & Grinding Halt in Ghent and the show with Demisor & Looking For An Answer in Antwerp both were great. Thanks to everyone who showed up! Much appreciated. We have a couple of new shows planned, one of them is already confirmed; with Psychofagist, Murder Intentions and Hybrid Viscery in Oostend on October 10th. Some more will follow soon!

Meanwhile we're finishing up for the split with Alkerdeel. Should be out later this year.

We'll also appear on a compilation with the likes of Shredder, Idiot Convention, King Terror, Last Legion Alive, ... (all Belgian bands, over 20 in total and +/- 1h of grindcore, crust, doom, stoner, hardcore, ...), that will be out in the fall of 2012. Tracks will be of the same recordings as the European Fastness compilation tracks (which can still be purchased through us or the other bands or you can check our songs here at http://adenofrobbers.bandcamp.com) and date from 2008.

That is all, more news on the split with Alkerdeel and the new shows soon!

As mentioned before we'll be playing a show with Thou (us), Grinding Halt (nl), Moloch (uk) and our friends in Wounds (be). Personally I'm ultra excited to be playing with my favourite band of the last couple of years, so yeah... show of the year!

Also we recorded 13 "new" tracks (tracks that were created between 2009 and 2012) for a split LP with Alkerdeel. Only vocals need to be recorded and mixing and mastering needs to be done.
Posted by C-A-D at 2:43 PM 0 comments

After the show with Alkerdeel we started writing new tracks and are slowly but steady recording for the split with above mentioned black/sludge/drone masters.
In the meantime we're playing some shows the coming months:

Evil has returned to our rehearsal spot. It will be transfered on vinyl and preached to the masses again this winter. Beware!
Posted by C-A-D at 7:10 PM 0 comments